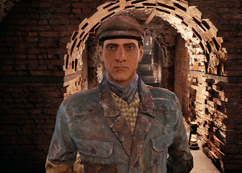 End of the Line
Tactical Thinking

“It's my envious job to keep track of all the dead drops and grab incoming agents and tell them where they're needed. I don't suppose you want to switch places?”

Drummer Boy is the primary courier and liaison for the the Railroad in 2287.

Not much is known about Drummer Boy. When speaking of himself, he expresses himself as a punctual person with great attention to detail. His role in the mysterious intelligence community known as the Railroad lands him the responsibility of being the liaison between agents and is in charge of the dead drop system organized by Desdemona. The system is the primary method used by the organization's network of safehouses to keep in contact and coordinating the extraction of fugitive Gen-3 synths from the region. While this method is slow and it creates much legwork for Dez's runners, it provides an extra layer of security to the Railroad's work. For those reasons, Drummer Boy is often bored with his current job, wishing that he would switch places with a heavy like Glory and conduct field ops. Yet Drummer Boy is comfortable with where he stands due to his vitality to the organization's motives in the area.

Drummer Boy appears only in Fallout 4.

Drummer Boys were essential to battlefield communication in the military of most Western nations during the 18th and 19th centuries. Drumbeats were used to maintain the tempo of march and various drum rolls were used to signal orders across the battlefield. Contrary to popular belief, most drummers were adult men and were expected to be multi-lingual and memorize the drum signals of other nations as well as their own.

Retrieved from "https://fallout.fandom.com/wiki/Drummer_Boy?oldid=3246708"
Community content is available under CC-BY-SA unless otherwise noted.