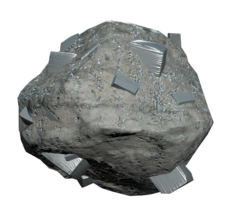 Dross is a quest-specific weapon in Fallout 76.

A ball of mineral waste, appropriately sized for tossing at things.

Dross is a quest-specific throwable received as part of the Dross Toss daily quest. The player character receives five as during the quest and they are removed from their inventory after the quest is completed.¹

¹ Dross can be kept indefinitely by dropping them during the event timer, and picking them back up after the quest expires.

Retrieved from "https://fallout.fandom.com/wiki/Dross?oldid=3338750"
Community content is available under CC-BY-SA unless otherwise noted.