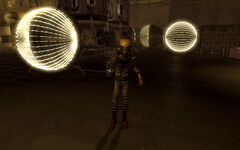 Drone control device is a miscellaneous item in the Fallout 3 add-on Mothership Zeta.

With the drone control device, the Lone Wanderer is able to activate drones (contained in drone pods) found anywhere in the Mothership, at a maximum of one drone follower at a time: a support drone or a guardian drone.

The device will also deactivate any active hostile drones in the area once any nearby aliens are killed (thus leaving no preprogrammed allies for the drones to defend). They will not reactivate even if any aliens show up from another area, but they will not fight for the Lone Wanderer either. However, leading the drones away from the aliens will not cause them to deactivate.

It can be looted from an alien in Mothership Zeta's robot assembly. It was used by an alien in the assembly area to activate and control guardian and support drones.