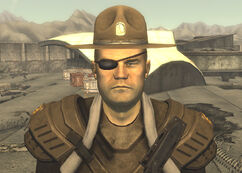 “You can rest when you're dead, private! Move your ass!”

The drill sergeant is an NCR Ranger who was included in the retail version of Fallout: New Vegas, supposed to be stationed at Camp McCarran.

He was removed along with the recruits in the patch that preceded the add-on releases, to free up memory.[1] He can be reenabled on PC with two commands: prid 0fe1ce and enable.

The drill sergeant was to be found in the runway area on a platform, shouting at NCR recruits.

He serves the same purpose as his counterpart, the Legionary instructor, in training new recruits.

The drill sergeant was patched out from Fallout: New Vegas. However, he as well as the NCR recruits can still be seen in other versions of the game, such as the French version.

Retrieved from "https://fallout.fandom.com/wiki/Drill_sergeant?oldid=3242473"
Community content is available under CC-BY-SA unless otherwise noted.