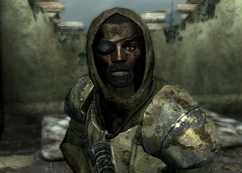 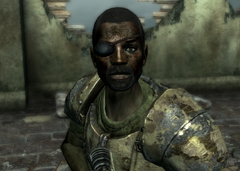 The drifter, without hood

The Drifter is a hostile wastelander who can be found in Dickerson Tabernacle Chapel in 2277.

The Drifter was cast out from the Treeminders long ago, and forced to eke out an existence hunting mutated wildlife and stealing from hapless wastelanders. Due to the yao guai prowling the vicinity, the Drifter has wisely decided to snipe from the safety of a high spire, where he dimly remembers his time with Harold's friends.[1]

He carries the unique Reservist's rifle.

The Drifter spends his days standing guard on the chapel's top floor attacking anything that gets close.

The Drifter is located on the top floor of the chapel and will attack the player character once they reach the building.

The Drifter appears only in Fallout 3.

Retrieved from "https://fallout.fandom.com/wiki/Drifter_(Fallout_3)?oldid=3186222"
Community content is available under CC-BY-SA unless otherwise noted.