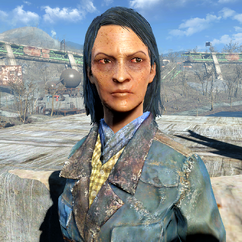 “The name's Dreth. That's all you need to know. Now, you here for business? Ain't got all night.”

Dreth is a trader in the Commonwealth in 2287.

She sells a small number of weapons, food, and ammunition, and is accompanied by two Gunner mercenary guards. She can be found as a random encounter at a campsite.

Dreth appears only in Fallout 4.

Dreth can become "broken," only responding "Yes?" when spoken to and will not give any dialogue options, meaning the player character cannot trade with her. [verified]

Dreth with her bodyguards
Add an image to this gallery
Retrieved from "https://fallout.fandom.com/wiki/Dreth?oldid=3180620"
Community content is available under CC-BY-SA unless otherwise noted.