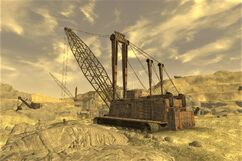 A dragline is a vehicle found in the Mojave Wasteland.

A dragline excavator is a piece of heavy equipment used in mining and excavating. A large bucket is suspended by a wire cable, which is lowered to the material to be excavated. Once complete, the operator lifts the bucket and transports the material to its destination.

Before the NCRCF prison break and subsequent deathclaw infestation, the Quarry Junction workers utilized these pre-War machines in their mining operations, along with dynamite, in order to make cement for the New California Republic.[1] Chomps Lewis also mentions that the draglines are pre-War, and need to be repaired once in awhile.[2]

Retrieved from "https://fallout.fandom.com/wiki/Dragline?oldid=3264517"
Community content is available under CC-BY-SA unless otherwise noted.