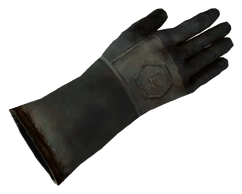 It visually differs from the regular scientist glove, in that it is a darker color and bears a skull badge. When using this glove in combat, this chemical glove emits a small electronic pulse. On successful hits, the weapon has an object effect called "MADNESS!!!", which reduces the target's Energy Weapons skill and Perception significantly. "Mad Science Attack!" is the critical effect that causes knockback and frenzies enemies on a Critical Hit. Combined with its high critical multiplier, the frenzy effect makes it very useful as a crowd control weapon. However, the frenzy effect also effects friendly targets that are hit, including companions once they are fired.

Dr. Mobius' glove can successfully strike about 495 times from full condition before breaking.

It can be found near Dr. Mobius in the Forbidden Zone dome, lying on a table immediately to the left of the center stairs, next to some of Dr. Mobius' work.

The glove inside the dome
Español Русский Українська 中文
Community content is available under CC-BY-SA unless otherwise noted.
Advertisement