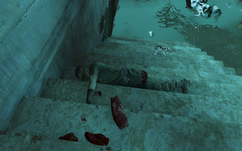 Inside the World of Refreshment

Corporal Downey is a deceased Gunner in Nuka-World in 2287.

Corporal Downey was a member of Sergeant Lanier's recon team that tried to secure the Nuka-Cola bottling plant. Unfortunately for the recon team, the facility was inhabited by Nukalurks. Severely underestimating the Nukalurks, Downey lost one of his legs before he was dragged away to safety by Private Clay.

However, the recon team became trapped and Downey tried to send Clay to get help from their main camp on the Bradberton overpass, only to hear Clay's screams as the Nukalurks killed him. Realizing that his chances for survival were hopeless, Downey made a holotape describing his predicament before deciding to "taking this matter into [his] own hands."

Corporal Downey appears only in the Fallout 4 add-on Nuka-World.

Retrieved from "https://fallout.fandom.com/wiki/Downey?oldid=3361677"
Community content is available under CC-BY-SA unless otherwise noted.