“The footlocker is buried on the island with a single tree in the Dove Delta. Be careful, I peppered the area with a bunch of fake mounds just incase the Hughes gang finds this location.”— Benny's message to Ozwaldo.

The Dove Delta is a location in Point Lookout in 2277. It is a series of small sand bars in the southwest of the Point Lookout map.

Dove Delta contains a number of small sand islands surrounded by water. The islands have a number of "loose dirt mounds," which can be dug up with the use of a shovel. The islands are generally inhabited by swampfolk and a couple of mirelurks will also be nearby.

A holodisk, titled "For Ozwaldo" is lying on an island with a single tree directly southwest of the small dock, just beyond the outstretched right hand of a skeleton (presumably Ozwaldo) along with his shovel. The note explains where to dig - "on the island with a single tree." There are actually two such islands: the one on which the note is found (although the bush could have been included in the count) and another directly south of it. On the southern of these islands lies the treasure. It contains 20 pre-War money and some ammunition.

Dove Delta appears only in the Fallout 3 add-on, Point Lookout. 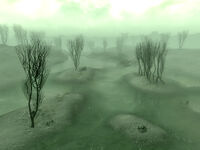