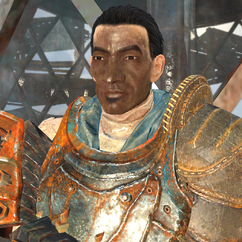 Douglas is the leader of the Trappers at Brooke's Head Lighthouse in 2287.

Douglas is the leader of the Trappers at Brooke's Head Lighthouse. One day after taking over the lighthouse, the Trappers spotted a group of fishermen nearby led by Danny Dalton and began opening fire on them. Douglas fired the shot that killed Danny, causing his wife to develop a deep grudge against him.

The Sole Survivor is tasked with killing him by Cassie Dalton during the quest Blood Tide.

Douglas appears only in the Fallout 4 add-on Far Harbor.

Douglas' body may sometimes appear as that of a female.[verified]

Douglas with a female body
Add a photo to this gallery
Retrieved from "https://fallout.fandom.com/wiki/Douglas?oldid=3363300"
Community content is available under CC-BY-SA unless otherwise noted.