The double-barrel shotgun is a weapon in Fallout 4.

The double-barrel shotgun is a two-handed weapon that uses 12-gauge shotgun shells as ammunition. Intended for use at close range, the double-barrel shotgun deals a large amount of damage and is useful against any enemy in close range to the shooter. Later modifications will increase its damage in line with more advanced weapons and also modify its range, accuracy and recoil.

The biggest downside to this weapon is its low fixed capacity of two shells. This necessitates frequent and somewhat lengthy reload times that leave the player character vulnerable. Legendary modifiers might come in handy to compensate for the slow reload animation and low ammo capacity, especially those which provide bonuses to base damage, such as "Explosive" or "Mighty." It can also become extremely powerful with the "Never Ending" legendary prefix, especially when coupled with an advanced receiver and heavy investment in the "Rifleman" and "Bloody Mess" perks, due to the shotgun's very high fire rate and damage per shot.

Despite being a sawn-off barrel, the sawed-off barrel mod retains its front bead sight when affixed. 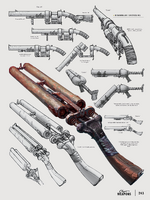