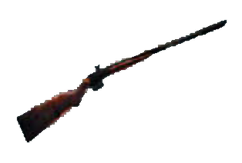 “Your average full-stock double barrel shotgun, meant for hunting small game. In the wasteland, however, even the bugs don’t qualify as small game. Still, the weapon sprays pellets for decent damage.”— FOBOS Manual[1]

The double-barrel shotgun is a Small Gun in Fallout: Brotherhood of Steel.

A shotgun, also called a "scattergun," is a firearm designed to shoot a multitude of lead or steel balls of varying sizes, greatly increasing the weapon's hit potential. This makes it very effective at hunting game.[Fallout 2d20 1] However, the accuracy and power found at close range starts to diminish as the target gets farther away. Shotguns designed for the military's use are often called "combat shotguns."

It's really powerful weapon through much of the game, especially with anyone with high Critical Chance, but it uses far too much ammunition.

Retrieved from "https://fallout.fandom.com/wiki/Double-barrel_shotgun_(Fallout:_Brotherhood_of_Steel)?oldid=3495325"
Community content is available under CC-BY-SA unless otherwise noted.