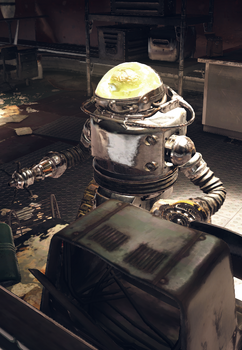 Doctor Dias is a pre-War scientist in the RobCo Research Center, whose still-living brain remains preserved there in 2103.

At some point before the war, Doctor Dias devised the Encephalon Extraction Program, a part of RobCo Industries' Semi-Autonomous Immobile Weapon Platform Research. The project ensured that the entire research team of the facility would have their brains scooped and suspended in a biomedical solution which would keep their cognitive functions intact and ready to be used for several lifetimes.[1] The project was approved by RobCo, despite the ethics department and the other scientists objecting to the idea.

Her brain was one of the ones that were removed and stored in preservation vials, but because of the Great War, it was never installed into a robobrain. The player character can choose between hers and two more brains to install into a robobrain.

Doctor Dias appears only in Fallout 76, introduced in the Wastelanders update.

Retrieved from "https://fallout.fandom.com/wiki/Dorothea_Dias?oldid=3311728"
Community content is available under CC-BY-SA unless otherwise noted.