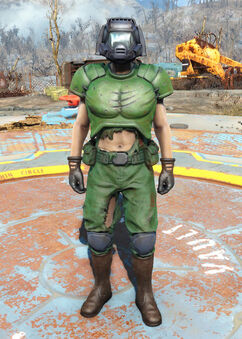 FEXXX804
“It's been said that the classic green armor of the Space Marine can protect against the very forces of Hell itself. The Wasteland definitely qualifies.”— Store description

The Doom Marine armor and Doom Marine helmet is a set of armor in the Fallout 4 Creation Club content "Doom Classic Marine Armor."

According to the Creation Club description, the armor hails from a space marine who used it against the forces of Hell, and has now somehow made its way into the Sole Survivor's inventory for use in the Commonwealth.

While the armor itself is similar in tone and shape to a form of combat armor, there are distinct differences. The helmet is closed and has a reflective visor. The green shoulder pauldrons are attached to the chestpiece by some form of cable. The chest piece itself is stylized to look like a muscular torso and ending at the rib cage, the center of which has three claw marks. The fatigues worn under the armor are a darker green and heavily torn, exposing the wearer's stomach and leg. The belt has multiple pouches worn on each side. The armor also comes with black gloves. Gray kneepads are worn in addition to brown boots.

Initially, this armor could not be modified at an armor workbench. A patch changed the armor so that it was no longer at full strength initially and required extensive modification to get back to the original, extremely high levels of Damage, Energy, and Radiation Resistance.

The current stats are as follows:

The Damage Resistances for the armor are as follows:

Radiation Resistance is a separate upgrade:

Fully upgraded, the armor will have 152 Damage Resistance, 135 Energy Resistance and 110 Rad Resistance. The helmet cannot be upgraded.

Additionally, it can be painted in the following colors: brown, green, grey and red.

Upgrading the armor does not add additional weight. It will always be 20 weight.

Worn by a female character
Українська
Community content is available under CC-BY-SA unless otherwise noted.
Advertisement