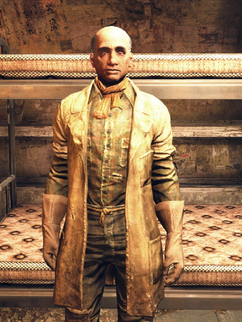 Dontrelle Haines is a terminally-ill man living in the Morgantown Airport terminal in Appalachia in 2103.

Before the Great War, Dontrelle served as a medic in the United States Army.[1] As of 2103, Dontrelle spends his time in the Morgantown Airport terminal. Here, he mourns the death of his younger brother, Marcus, who was a member of the Responders and died fighting the Scorched.[2] Dontrelle suffers from radiation-induced cancer, and as such does not fear the Scorched near the airport, knowing that it will not be long before the cancer takes him anyway.[1] He stays in the airport terminal because when he dies, he will not be far from his brother.[3]

Because the Maria's last words holotape is tied to the quest Final Departure, it will disappear if it is not taken during the quest. However, Dontrelle will still mention the holotape when asked about the Responders; even if the holotape is not on the map table, he will say that it is.[5]

Dontrelle Haines appears only in Fallout 76, introduced in the Wastelanders update.

Retrieved from "https://fallout.fandom.com/wiki/Dontrelle_Haines?oldid=3383353"
Community content is available under CC-BY-SA unless otherwise noted.