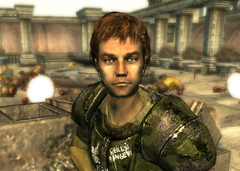 Donovan without his battle helmet

“Oh wow, Reilly snapped out of her slump now that you're mapping for the Rangers. Now we go out and kick ass like the old days. Ooh-rah!”

Donovan is the Reilly's Rangers engineer first seen on the rooftop of the Statesman Hotel in 2277.

Donovan was born in 2242 and works as a technical specialist, assisting the team with repairing electronics. He fights alongside his team when needed, but shows his most prowess with hacking.[1]

One of the entries in Reilly's terminal implies that he frequently fights with Brick. According to Reilly's terminal, Donovan was also either a member of the Brotherhood of Steel or at least a contact of theirs before joining Reilly's Rangers.

* Donovan is the only member of Reilly's Rangers who wears the Ranger battle helmet.

Donovan appears only in Fallout 3.

If Donovan dies in the random encounter, the rest of the Rangers may turn hostile. [verified]

Retrieved from "https://fallout.fandom.com/wiki/Donovan?oldid=3450121"
Community content is available under CC-BY-SA unless otherwise noted.