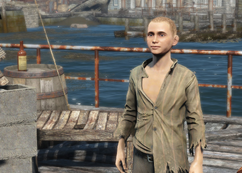 Dock behind The Shamrock Taphouse

Donny Kowalski is a child living in ruins of the Boston waterfront, in the Commonwealth in 2287.

Donny is a small boy who lives alone on a dock behind the Shamrock Taphouse, overlooking the shores of Boston's largest bay, Boston Harbor. Donny lost his parents at a young age, and spends his time fishing and hiding from mirelurks.[1] His current obsession is a "sea monster" hiding in the bay, although things are not as it may seem.

Donny Kowalski appears only in Fallout 4.

Retrieved from "https://fallout.fandom.com/wiki/Donny_Kowalski?oldid=3353323"
Community content is available under CC-BY-SA unless otherwise noted.