“My older brother sacrificed himself so they could evacuate some of the wounded.”— Private Kowalski

Donald Kowalski fought, and died, at the battle of Hoover Dam. He sacrificed himself so wounded soldiers could be evacuated and was killed when Boulder City was blown up as a trap for Caesar's Legion. He is the older brother of Private Kowalski who can be found "paying his respects" at the memorial in Boulder City.[1]

Donald Kowalski is mentioned only in Fallout: New Vegas. 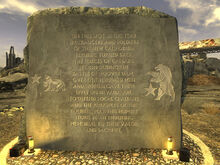 The honorary inscription on the Memorial 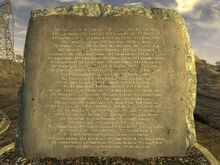 List of honored servicemen
Add an image to this gallery

Retrieved from "https://fallout.fandom.com/wiki/Donald_Kowalski?oldid=3123073"
Community content is available under CC-BY-SA unless otherwise noted.