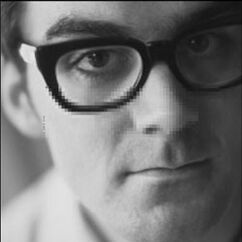 Trade Holodisks to the Geeks

Donald is one of the scientists living at the Boulder Dome in 2253.

Donald is an efficiency expert and a yes-man who gets the job done. He is "creepy" and non-communicative unless he is forced to talk to someone. Donald grew up in the squatter camp outside Vault 15.[1] He, along with all of the scientists, was infected a strain of Limit 115 while exploring one of the Dome's labs.[2]

Donald has taken a liking to Xian, but she doesn't really register it, in fact, she is often quite dismissive. She thinks he is a bit of a "doofus," she is, however, concerned about the influence James has over him.[3]

Agnes likes Donald, but she's worried about his subservient nature to Goddard and his sheep-like mentality. In addition, Donald "lectured" Agnes once, and that kind of irritated her. Like Xian, Agnes is worried about the influence that James has on Donald.[4]

Goddard likes Donald's efficiency and reliability to do as he's told in the manner in which he was told to.[5]

The scientists have a meticulous daily routine. After waking up they check the power conduits to the food supply, testing the mix. After that they check for anything that needs immediate attention followed by a health check including blood samples and a complete physical, logging it into the computer to study the plague. They check the safety seals in their respective areas and regroup to inspect their protective suits before putting them on and re-inspecting each other's suits.

The scientists check their Pip-Boys, log the routine and perform a perimeter walk of Levels 1-3. They log Presper's activity and check on ZAX, getting a report. Finally, they check on the fusion plant and assess the perimeter of the complex for leaks or possible break-ins. After all of this, they will try to spend at least an hour learning something about the Dome and the curriculum.[6]

Trade Holodisks to the Geeks: Talking to Donald, or indeed any of the scientists, will reveal ZAX's reliance on holodisks. The scientists only have 100 left, and they are being consumed at a rate of one a day. The countdown initiates upon finding out. The Prisoner can trade holodisks with the scientists to prevent them from running out and ZAX from cannibalizing itself.[7]

Donald was to appear only in Van Buren, the canceled Fallout 3 by Black Isle Studios.

Retrieved from "https://fallout.fandom.com/wiki/Donald_(Van_Buren)?oldid=3176196"
Community content is available under CC-BY-SA unless otherwise noted.