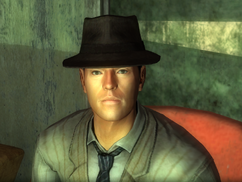 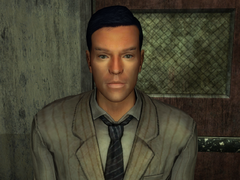 Don without his hat

Don Hostetler is an accounts manager for the Crimson Caravan and chem pusher for the Great Khans in 2281.

Don Hostetler took a job as an accounts manager for the Crimson Caravan to provide for his family. Although he works long hours, he makes enough caps to sustain himself, his wife and daughter.[1]

Despite his current affair with his secretary, Angie Beckers, and his involvement with the operations of the Great Khans, Don is highly protective of his household and family. He and his wife purchased weapons to keep themselves safe from burglars, a threat that has become more apparent ever since their single-minded daughter Alice ran off with Andy Scabb to North Vegas Square. This has made her father worried she herself has been pulled into illegal activity.

Aba Daba Honeymoon: The Courier has to deliver a package to Don Hostetler for Diane.

If the Courier kills his wife or daughter, he will not talk to them and say "I should kill you right here, for what you've done" when interacted with. This makes it impossible to complete Aba Daba Honeymoon.

He will cut short inquiries about work, telling the Courier to go away and speak to Alice McLafferty.

Retrieved from "https://fallout.fandom.com/wiki/Don_Hostetler?oldid=3234832"
Community content is available under CC-BY-SA unless otherwise noted.