Don't Make a Beggar of Me 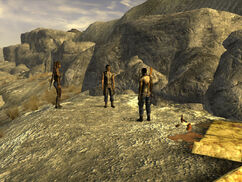 “I was expecting a shipment of chemicals. It's usually in a suitcase dropped off in one of the big machines up here. Because of the deathclaws, I have to assume that the suitcase is still in Sloan. Snoop around the place and get it for me.”— Melissa

Don't Make a Beggar of Me is a side quest in Fallout: New Vegas.

If the Courier has killed Chomps Lewis and already taken Tyrone's letter, it may be impossible to complete this mission, as Tyrone will not appear in Primm.[verified]

Retrieved from "https://fallout.fandom.com/wiki/Don%27t_Make_a_Beggar_of_Me?oldid=3089691"
Community content is available under CC-BY-SA unless otherwise noted.
... more about "Don't Make a Beggar of Me"
RDF feed
Has platform
PC +