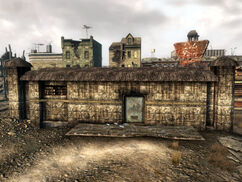 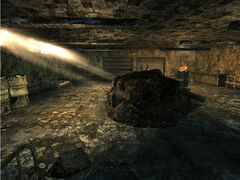 Interior of the garage

Dominic and Machete's house is a location in the Capital Wasteland. It is the residence of Dominic D'Ellsadro and Machete in Canterbury Commons.

Dominic and Machete's house can be found in Canterbury Commons located right next to, or northeast of, the Dot's Diner. The house is filled with various parts for all schematics, such as turpentine, surgical tubing and toy cars. A couple of ammunition boxes can be found in the office, along with several desks and broken computers. There is a Nuka-Cola vending machine in the main room by the entrance. At alternating hours, either Dominic or Machete can be found sleeping in a rack or just idling. There are a few drinking fountains for replenishing health and a workbench.

Dominic and Machete's house appears only in Fallout 3.

Bottlecap mine
Add a photo to this gallery
Retrieved from "https://fallout.fandom.com/wiki/Dominic_and_Machete%27s_house?oldid=3366343"
Community content is available under CC-BY-SA unless otherwise noted.