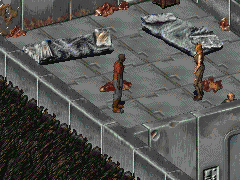 “Only the powerful can pass, but they will be kept from passing.”

Dominic Moore[1] is one of the four psykers, along with Gideon, Wiggum, and Lucy, that are kept behind a force field in the Master's lair beneath the Cathedral in 2161.

A scruffy-looking fellow, Moore is one of the Master's failed experiments in trying to awaken psychic powers in humans, as he is quite clearly insane. Moore is a pyrokinetic-dominant psyker.[2] These powers are apparently suppressed when Moore is fitted with a psychic nullifier. While equipped with the nullifier, Moore's powers still manifest through visible flares from his eyes.[3]

Moore appears only in Fallout and is mentioned in the Fallout Bible.

Retrieved from "https://fallout.fandom.com/wiki/Dominic_Moore?oldid=3356257"
Community content is available under CC-BY-SA unless otherwise noted.