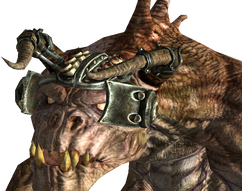 A domestication unit is a piece of deathclaw headgear that appears in Fallout 3 and the Broken Steel add-on utilized by the Enclave.

A highly advanced form of Enclave technology used to assume control over the minds of deathclaws for the purpose of military use, deploying them as bio-weapon shock troops. They are typically utilized at numerous Enclave outposts dotted throughout the Capital Wasteland and are involved in the Broken Steel quest, Shock Value.

The domestication unit can be reprogrammed through the use of the Brotherhood of Steel's control scrambler, turning the deathclaws against their former Enclave masters. The control scrambler immediately terminates the berserk deathclaw after a period of prolonged utilization, however.

When examined in V.A.T.S., the domestication unit on top of the Enclave deathclaw's crown is described as 'Enclave Mind Control'.

The domestication unit may actually be pre-war technology, as mentions have been made to the original creation of the deathclaw being a project to replace human soldiers in battle.

An Enclave deathclaw controlled by a Domestication unit.
Add an image to this gallery
Retrieved from "https://fallout.fandom.com/wiki/Domestication_unit?oldid=3066222"
Community content is available under CC-BY-SA unless otherwise noted.