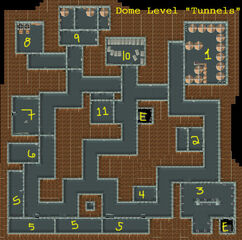 The Dome tunnels is the 4th sub-level of the Boulder Dome. This area of the dome is not accessible to the Prisoner until they are at least to part 2 of the game. This level is toxic and irradiated. The only way to survive here is by wearing an environmental suit like the members of the infected scientist team are wearing.

The layout description is in accordance with the numbered picture to the right:

The Dome tunnels did not appear nor were mentioned in any published games, but was going to appear in Van Buren, the canceled Fallout 3 by Black Isle Studios.[1]

Retrieved from "https://fallout.fandom.com/wiki/Dome_tunnels?oldid=3175682"
Community content is available under CC-BY-SA unless otherwise noted.