Getting a Clue
Reunions

Dogmeat is a German Shepherd living in the Commonwealth in 2287. He will be named Dog until the Sole Survivor speaks to Mama Murphy about his true name during the quest, When Freedom Calls, or until Nick Valentine reveals his name during Getting a Clue.

A typical Commonwealth canine, Dogmeat is capable of tracking a man's scent for miles. While he doesn't really have an owner, he is a loyal and faithful companion to those he accompanies.

During the time that the Sole Survivor was cryogenically frozen in Vault 111, Dogmeat assisted Nick Valentine on a number of cases, and also accompanied Preston Garvey and his group of settlers on their way to Concord.

When the Survivor arrives, they can choose to adopt Dogmeat, who will accompany them on their travels throughout the Commonwealth. Dogmeat's remarkable senses and tracking abilities come into good use when the Sole Survivor searches for Kellogg.

Dogmeat can be equipped with a variety of cosmetic items that can be placed, according to the type of item, into four distinct slots. These slots are: "eyes," "headband," "neck" and "torso."

Dogmeat loves the Sole Survivor unconditionally, and thus is neither negatively nor positively influenced by their actions. As of the base game, he is the only companion, aside from temporary followers during quests, who is considered to be truly neutral.

This Dogmeat appears in Fallout 4 and Fallout Shelter.

“Originally there were two slots for companion types, you could have both Dogmeat and a single human companion. That is why there are two aliases and two separate functions. Now we are only letting you have either dogmeat or a single human companion. Rather than risk breaking everything by trying to unifying everything into a single alias/function call I am going to just put hooks in SetCompanion and SetDogmeatCompanion to auto dismiss the other.”

Dogmeat in the Fallout 4 trailer

A Brotherhood paladin, the Sole Survivor, Dogmeat and Preston Garvey.

Dogmeat in an endings slide 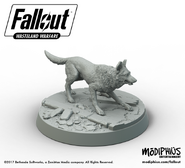 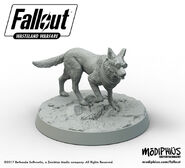 Retrieved from "https://fallout.fandom.com/wiki/Dogmeat_(Fallout_4)?oldid=2991022"
Community content is available under CC-BY-SA unless otherwise noted.