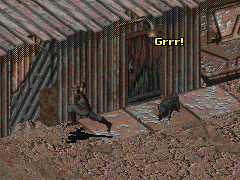 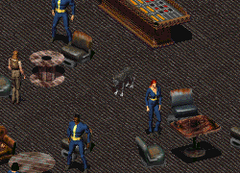 Dogmeat is a dog that can be found in Junktown in 2161. He can be found terrorizing Phil, an old man in Junktown, by remaining at the doorway to his house and keeping him out. The Vault Dweller can distract him for the old man and, by doing this, recruit him as a companion.

His previous owner had been killed by thugs hired by Gizmo (most likely the Skulz) about a month before Dogmeat met the Vault Dweller. In the Fallout 2 manual, it is disclosed that Dogmeat died in the Mariposa Military Base after running into a force field (although in the game, it is possible to survive the military base with Dogmeat alive - usually by sealing him inside different rooms to protect him from the super mutants).

Scott Bennie was the designer who came up with the name "Dogmeat" for the in-game character. The name was initially applied to Jake's dog in the Hub (previously called Dogshit). Later, it was applied to the current non-player character Dogmeat, either by Tim Cain or Jason Anderson.[1]