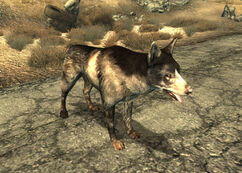 “You know, I think you're the first dog I've met that didn't try to eat me.”— Lone Wanderer to Dogmeat

Dogmeat is a possible companion of the Lone Wanderer in 2277.

An affectionate and dextrous puppy, Dogmeat's skills as a four-legged scavenger and ferocious fighting companion were not lost on his first master, who was recently killed by raiders in the vicinity of the Scrapyard. Dogmeat has tracked the raiders down, loyal to the end.[1]

His name is in homage to the Dogmeat from Fallout, and, according to the developers, he is a descendant of the Vault Dweller's original canine companion that died in a horrible accident involving a force field.

Front shot
Add an image to this gallery

Retrieved from "https://fallout.fandom.com/wiki/Dogmeat_(Fallout_3)?oldid=1914635"
Community content is available under CC-BY-SA unless otherwise noted.