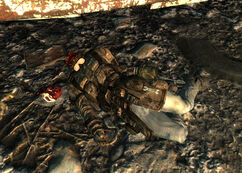 Dogmeat's owner is a dead scavenger found in the Capital Wasteland in 2277.

Not much is known about this wasteland dweller other than the fact that he was the owner of Dogmeat, a possible permanent companion.

It's possible for the Lone Wanderer to witness Dogmeat and his owner engage a gang of raiders at the scrapyard; the owner will immediately be killed. If the attacking raiders are killed, and Dogmeat survives, the Lone Wanderer can become Dogmeat's new master.

Their gender and appearance are initialized randomly like in a normal scavenger-type wilderness encounter.

Dogmeat's owner appears only in Fallout 3.

Retrieved from "https://fallout.fandom.com/wiki/Dogmeat%27s_owner?oldid=3318502"
Community content is available under CC-BY-SA unless otherwise noted.