“Someone let Fido out without a leash. Guess you'll need to get him back.”

On the ground level, in the second room, there is a civil ghoul you can speak to. The third room has a group of five feral ghouls to fight, and the fourth has a group of three feral ghouls. Heading down the elevator to the second floor, there are three feral ghouls in the first room from the right. There is another group of three ghouls in the fourth room from the right. On the bottom floor, as soon as you exit the elevator, there is a room with an irradiated ghoul accompanied by four feral ghouls. As soon as they are defeated, a black labrador pet is rewarded. The room also contains two random rare weapons and a rare outfit recipe. The next room to the right has a group of five ghouls. 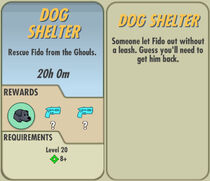 Rewards
Add a photo to this gallery
Retrieved from "https://fallout.fandom.com/wiki/Dog_Shelter?oldid=3269325"
Community content is available under CC-BY-SA unless otherwise noted.