20h
“A hastily written and grammatically incorrect note was left outside the Vault door: “IF U EVAR WANT TOO SEE YOU'RE DOG AGAN, COME TWO ARE BIG BILDING AND BRING GUNZ, caps, AND SNAX.” It must've been written by some really stupid Raiders, because we don't even have a missing dog. But if those jerks really do have a kidnapped canine, it still needs rescuing!”

This quest takes place in a vault with a random layout. The second room on the top floor has three raiders whom the dwellers speak to before engaging in combat. The rest of the enemies are typically raiders in groups of three, radroaches in groups of three, and raider leaders accompanied by two raiders. On or near the bottom floor is a raider leader accompanied by three raiders who can be spoken to. The first and second dialogue options result in a fight, whereas the third and fourth options are peaceful. Either way, one will receive a rare Doberman dog pet. In the room where the player received the dog, there is a random rare outfit and a random rare weapon. 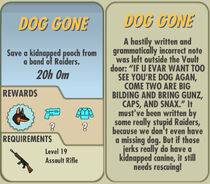