Fallout 4
Far Harbor
Nuka-World
“The Wasteland is home to a variety of dogs, from vicious wild curs to trained attack hounds.”— Loading screen

Dogs are animals that can be found in the Commonwealth, the Island, and Nuka-World in 2287.

Some dogs are wild, plaguing the wastes and killing livestock, but tame versions are necessary for many struggling wastelanders. There are also rare cases of domestic breeds that act as companions towards their bipedal counterparts. Humans and super mutants are the only species known to truly tame and domesticate these canines.

They are fiercely loyal to their owners. Before the war many of them had fur, but now many of them have lost it and their pink skin is visible. Some mongrels will attack on sight but can be pacified. There are a few different distinct breeds of dogs. Dogmeat for example, is a German Shepherd dog that may be a companion to the Sole Survivor.

Through the 200 years since the Great War, dogs have remained relatively unaltered by radiation. Two mutated counterparts of dogs can be found in the Commonwealth: the ghoulish mongrels and the FEV-exposed hounds.

Dogs, unlike in previous Fallout games, have special animations where they can grapple enemies down to the ground and hold them in place allowing their masters a brief advantage in combat.

Attack dogs are domesticated dogs, with a degree of training. They are usually seen in raider camps or with Gunners, Minutemen or Brotherhood of Steel patrols. They are sometimes equipped with various pieces of dog apparel.

Found in the Bradberton Amphitheater, these dogs are owned by the Pack. They will turn hostile if The Pack is attacked. These dogs can either be mongrels or junkyard dogs, and often have dog armor equipped. They can spawn battling in the cage fight arena against other entities, such as Pack captives, or be wandering around the amphitheater.

Dogs appear in Fallout 4 and its add-ons Far Harbor and Nuka-World. 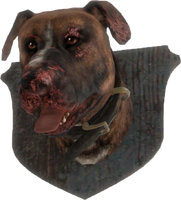