Dogs are creatures found in the Mojave Wasteland in 2281.

Dogs in Fallout: New Vegas appear in many different forms, serving as guard dogs for Caesar's Legion, the Fiends and the New California Republic, and as pets of wastelanders such as Old Lady Gibson and Sunny Smiles. Non-aggressive dogs may also be found throughout the wasteland, including one simply referred to as "dog," which may be found wandering outside of the NCR Correctional Facility.

Vicious dogs can often be found in packs, in several areas of the Mojave away from human settlements.

Legion mongrels and NCR guard dogs will attack Couriers that have low reputation with their associated faction. Fiend guard dogs and vicious dogs will attack on sight, regardless of reputation, while wild dogs and coyotes will only attack if the Courier is close enough to make them feel threatened. With the Animal Friend perk, dogs will not attack unless provoked.

Regular dogs with standard statistics and characteristics but no special attributes. Large dogs do not differ significantly, aside from being stronger than the basic variety. Regular dogs roam Zion Canyon. Old Lady Gibson owns six dogs to guard her junkyard.

Legion mongrels are dogs owned and bred by the Houndmasters of Caesar's Legion. Mongrels are mainly used in combat and scouting missions by the Legion. The current mother of the mongrels in the Fort is Lupa. Due to their thick, shaggy hair and their red-colored eyes, they are a distinctly different breed than most dogs found in the game. Their appearance more-so resembles a wolf or coyote. While most of the mongrels are bred, Antony informs the Courier that some mongrels come from Denver, the "Dog City."

NCR guard dogs can be seen patrolling Camp Forlorn Hope and HELIOS One (including the shack containing terminal B) with NCR soldiers. In the quest You'll Know It When It Happens, if the Courier has the Animal Friend perk, Ranger Stevens will agree to lend his dog to them, allowing him to discover the undercover member of Caesar's Legion with the detonator for the bomb placed aboard Bear Force One.

Vicious dogs are a nearly hairless species of wasteland canine. Ruthless survivors of the wastes, these starving, irradiated mutts will attack anything that moves, including the Courier, unless they have acquired the Animal Friend perk. Vicious dogs are also known to hunt in packs.

Wild dogs and large wild dogs can be found near the NCR Correctional Facility. They are rarely hostile and will only attack the Courier if they get too close, or if first provoked by attacking them or one of their pack.

White Legs mongrels appear throughout the Zion Canyon, accompanying members of the White Legs tribe and will attack the Courier on sight. They are identical to the Legion mongrel albeit slightly larger, which implies that Caesar may have given them to the tribe to aid in destroying New Canaan. White Legs mongrels will not attack on sight with the Animal Friend perk.

Ranch dogs are a variant of dogs in the Mojave Wasteland in 2281.

Sheep dog was a type of dog cut from the final version of Fallout: New Vegas. 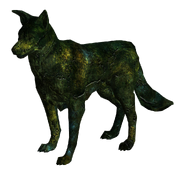