Fallout: New Vegas
“Eventually, I went back and married my childhood sweetheart and that was the end of my traveling days. Didn't miss it none then. Still don't.”— Doc Mitchell

Doc Mitchell's house is the home of Doc Mitchell and serves as starting location for Fallout: New Vegas. It is the de-facto medical clinic for the town of Goodsprings.

It is a single-story building with a living room, clinic area, kitchen, bedroom, restroom, and a small storage room. The living room houses the Vit-o-matic Vigor Tester which is used to assign SPECIAL points in the Ain't That a Kick in the Head quest. Some stimpaks and doctor's bags are located on a table next to the Vigor Tester machine. A copy of Today's Physician is located on a bench near the operating table.

In the clinic room, there is a chemistry set. With a Science skill of 25, the player character can either create 5 stimpaks or some chems. To the right of the chemistry set is a broken 9mm submachine gun. It can't be picked up, but it can be moved. With a Repair skill of 25, the player character can fix the weapon and it will be added to their inventory. Nearby, a metal box is found containing a laser pistol along with a random amount of energy cells.

Josh Sawyer mentioned that the items in Doc Mitchell's house are not marked as owned, so the player character can't force hostility before character creation is complete.[1] 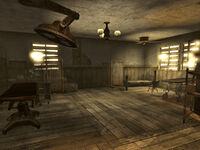 Where it all begins, with music that plays when you first wake up 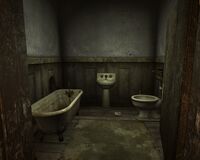 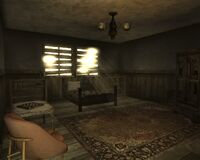 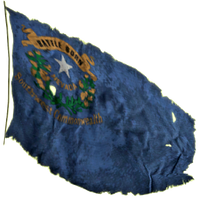