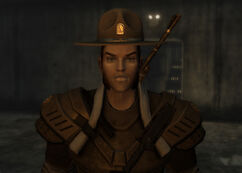 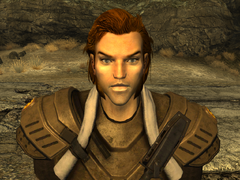 Dobson without his hat

“Goddamn, I knew Cooke's gang passed through these parts 'bout that frequently, but I didn't know they holed up here. Be a rude awakening, to find fifteen of those merciless bastards looking down at me snoozing on my bedroll!”

Ranger Dobson is an NCR Ranger scouting out in Hidden Valley in 2281.

A Redding native,[1] Dobson has seen plenty of action against slavers in his Ranger career.[2] As of 2281, he is stationed at Camp McCarran, but has recently gone off on his own to assess and scout out the NCR Correctional Facility that was lost to the Powder Gangers. He set up shop in a Hidden Valley bunker, intending to use it as a safehouse.[1][3] His main target has been the terrorist Samuel Cooke and his gang of roamers which he considers to be the most dangerous out of any other Powder Gangers.[4] Though he's after Cooke's gang, he considers all Powder Gangers the lowest of the low for preying on caravans and civilians, and will shoot any Powder Ganger on sight that he finds.[5]

His stay at the bunker has been fairly problematic, as Dobson has had trouble bringing his radio to broadcast properly. However, the area's "natural phenomena" sandstorms and the bunker's remote location still make it worth the hassle, as it keeps him relatively safe from any predators or troublemakers topside... At least that's what Dobson thinks.[6]

Dobson is a confident individual and takes pride in his work protecting the innocent of the Mojave Wasteland, but like any good Ranger; he isn't headstrong and knows his limits.[4][5] Other than the love of his job, Dobson loves to josh around with anyone he can, even if they're a complete stranger.[7][8][9] He's even been known to do so over the radio to HQ at McCarran, which has made the radio operators take his reports less seriously.[10] Although he shows his kindly side more, Dobson will become deadly serious when he suspects he's in danger or being played.[11][12][13] However, if the perpetrator admits to their wrongdoing, Dobson is willing to forgive them at the moment unless they persist.[14]

Retrieved from "https://fallout.fandom.com/wiki/Dobson?oldid=3266888"
Community content is available under CC-BY-SA unless otherwise noted.