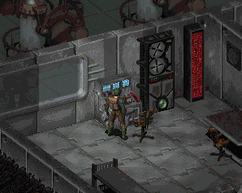 Dobbs, happy to be alive

“I heard the doctors say I was dead and then they threw my body onto a pile of other bodies.”

Private First Class Dobbs of the US Army lies cryogenically preserved at Sierra Army Depot in 2241.

Dobbs is a soldier of the United States Army. Sometime before October 23 2077, he was killed in battle and pronounced dead, and he claims to have learned this via an out-of-body experience. While he was out of body he observed his physical shell being taken to a laboratory and immersed in bio med gel, in an attempt to regenerate and revive him. This procedure may have taken place at Sierra Army Depot, but it is more likely this happened near whatever front line he was fighting on, to keep his body fresh for transportation to Sierra. He was no doubt destined for Dr. H. Lector's experiments like Private Callow, and would probably have had his brain harvested, if not for the evacuation of Sierra Army Depot between July 10 and October 23, 2077. When defrosted he looks healthy, but seems quite disoriented.[1]

The Chosen One can find him at the Sierra Army Depot, and defrost him. The bio med gel submersion and cryogenic preservation procedure appears to be successful, but if the Chosen One defrosts Dobbs, he wakes up a little disoriented but in good health, aside from a headache. However, a few seconds after setting off to rejoin his unit, he experiences post-cryogenic syndrome and disintegrates into a puddle of slime.

Dobbs appears only in Fallout 2 and is mentioned in the Fallout Bible.

Retrieved from "https://fallout.fandom.com/wiki/Dobbs?oldid=3261308"
Community content is available under CC-BY-SA unless otherwise noted.