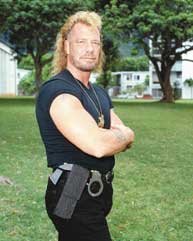 Do Bob's bounty hunter jobs was going to be a quest in Van Buren, the canceled Fallout 3 by Black Isle Studios.[1]

Bob doubles as a bounty hunter dispatcher. If the player inquires about jobs at Hoover Dam, Bob will say what he can provide. If the player accepts, then Bob will give him a bounty. The more the merrier (without getting ridiculous). About 5 or 6 bounties throughout the wasteland sounds reasonable. The player needs to take back the head of the bounty to Bob for verification. One bounty at a time.

Retrieved from "https://fallout.fandom.com/wiki/Do_Bob%27s_bounty_hunter_jobs?oldid=2777328"
Community content is available under CC-BY-SA unless otherwise noted.