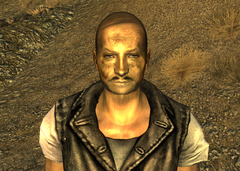 Dixon without his hat

Dixon is a drug dealer living in Freeside in 2281.

A local drug dealer with perpetually glassy and bloodshot eyes. As a local, he considers NCR squatters scum and treats them as less than people.[1] That is not to say that there is much of a difference to how he treats the rest of Freeside; as a sociopathic drug dealer, he thoroughly enjoys watching his customers succumb to the crippling effects of addiction.[2][3] His "special" Jet and whiskey are popular choices for addicts due to its inexpensive nature, but they are so addictive and low-quality that the effects of withdrawal would kill anyone that would try and get clean without the use of fixer.[4][5]

Although Dixon is a Freeside local and hates NCR squatters, he is not above selling to all the denizens of Freeside, including the locals themselves. Two of his customers are members of the Followers of the Apocalypse - Bill Ronte, a former engineer, is now addicted to Dixon's whiskey, and Jacob Hoff, a former chemist, is now addicted to Dixon's Jet. Given the current relations between the squatters and locals, this is enough for them to believe that he may be working for NCR to keep Freeside down.[6]

Dixon wanders around out near the east gate (just past Rotface) both night and day.

High Times: Dixon needs to be persuaded (or killed) in order to stop supplying chems and alcohol to Jacob Hoff and Bill Ronte.

At one point during development Dixon was slated to have two thugs in his employ, serving as bodyguards or enforcers, and armed with varmint rifles (both thugs also carry the incorrect ammunition for the weapon, like Dixon). Though not present in the game, both thugs are still present in the game's code and can be brought into the game using console commands.

Occasionally, Dixon's inventory will not reset after buying all his chems, even after a few days. [verified]