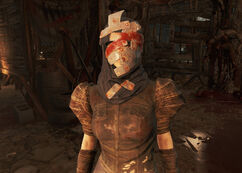 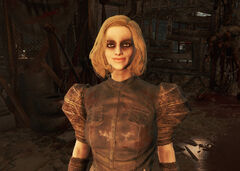 Dixie without her mask

Dixie is a member of the Disciples in Nuka-World in 2287.

Dixie is a young woman and a high-ranking member of the Disciples. Even in a gang centered on violence and bloodshed, she easily sticks out as the most bloodthirsty and psychopathic among her peers. Her abode inside of Fizztop Mountain is filled with mutilated corpses, cutting implements and trophies in the form of holotapes. Especially the latter trait, the compulsive urge to take souvenirs from her victims, is a common modus operandi among serial killers.

Listening to these tapes reveals how Dixie uses persuasion, misdirection, and her girlish demeanor to talk her targets into letting their guard down before she brutally murders them. One of Mags Black's terminal entries in The Parlor surmises that Nisha elevated Dixie to her current position to keep her under control instead of letting her run amok through the park and likely destroy the fragile peace between the gangs in the process.

Dixie appears only in the Fallout 4 add-on Nuka-World.

Retrieved from "https://fallout.fandom.com/wiki/Dixie?oldid=3256329"
Community content is available under CC-BY-SA unless otherwise noted.