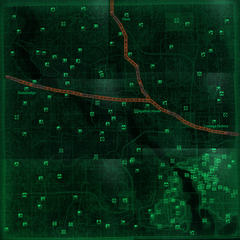 The District of Columbia monorail system was a large scale public transportation system for the Washington, D.C. region, operating before the Great War.[1]

Prior to 2077, the monorail system served the commuters of the region as an alternative to other methods of transportation. Infrastructure of the rail line was comprised of an elevated railway, branching past three boundaries of the map, including north, east, and west. The engine cars are marked with a CMR logo. Having since fallen into disrepair since the Great War, many sections of the monorail tracks and cars have fallen to the ground below, damaging nearby structures and roadways.

Beginning on the eastern side of the regional map, the monorail line starts as two parallel tracks traversing the area from its starting point near Corvega factory. Throughout the entirety of its infrastructure, the line is rarely in continuous sections and a variety of enemies wander below the portions that remain standing. Several train cars, including two immediately forward from the eastern start, are derailed and have fallen to the ground below.[2]

Continuing westward, an elevated freeway's collapsed has likewise crumbled the monorail line immediately after passing over two Red Rocket filling stations, one on each side. When the line reaches just south of Wheaton armory, it curves northwest and another train car sits atop tracks in front of the scrapyard. A camper to the left contains random loot. Moving forward results in arriving at the mid-point of the line, Agatha's house, where the two lines split, continuing in different directions - one heading west and one heading north.[3]

Heading west, the left hand side line will head southwest to Shalebridge on the western side of the map. The right hand side line will head to the northern edge of the map, near Oasis. Following the southwest line, one will pass over the top of Meresti trainyard and Hallowed Moors Cemetery. The rails begin to run parallel with a frontage road with Paradise Falls a short distance to the right. The frontage road becomes a bridge shortly thereafter, subsequently destroyed by a fallen monorail car.

As the line begins to veer to the west, one will pass Northwest Seneca Station and MDPL mass relay station to the left and Roosevelt Academy to the right. Another train car has fallen into a dried portion of a river bed, directly before approaching Five Axles Rest Stop.[4] An intact rail car sits on a longer portion of intact line as one passes by the abandoned car fort on the right and Shalebridge on the left. The map's edge is directly ahead, as one draws closer to the large concrete structures on the right, the SatCom Array NW-07c. One more train car is found on the tracks before the map's edge is reached, and the monorail line continues westward over the mountains.[5]

Circling back to the split at Agatha's, following the northbound route will lead first to Germantown police HQ and a full train, intact upon the tracks. The police HQ is situated to the left, and the rail continues towards the three tall smokestacks of the MDPL-13 power station. Progressing further northward, the tracks will have completely given way under four rail cars, creating a zig zag derailment below. The wreckage serves as a home to several raiders who have set camp next to the crashed cars.

Past the wreckage site, following the line will lead to a large wooded area and Reclining Groves Resort Homes, weaving through the area back and forth until it skirts both the Montgomery County Reservoir and broadcast tower LP8. Shortly thereafter, the tracks curve westward, running parallel with the elevated freeway to the right. Oasis is located to the right, beyond the cliff sides and the last train car encountered, sitting atop the tracks. Past the cars, the tracks and freeway both continue north beyond the reaches of the map.[6] [7]

Behind the ranger compound in Washington, D.C., additional monorail tracks can be found, but are not connected with one another congruently, and no train cars are found.

The District of Columbia monorail appears only in Fallout 3.

First crash encountered, from a distance

On the tracks near Oasis

Close-up of the logo on the monorail