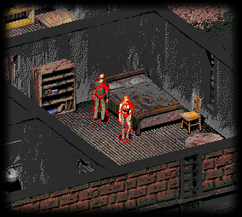 “There's a certain merchant who's... how to phrase this... not cooperating fully with the Underground.”— Decker

Dispose of merchant is a side quest in Fallout. It is given by Decker and requires the Vault Dweller to kill the merchant Daren Hightower and his wife for refusing to deal with the Underground.

To receive this quest the Vault Dweller must either speak to Lorenzo at the Friendly Lending Company and ask him about Decker, have killed Killian Darkwater for Gizmo, or vice-versa. In the former route, Lorenzo will tell the Vault Dweller who to go to for work. The Vault Dweller then ought to tell Kane in the Maltese Falcon that they are looking for a job and mention Lorenzo's referral.

In the latter two routes, directly talking to Kane will reveal that he knows about the Vault Dweller killing Killian or Gizmo and offers a job. The player character can bypass the dialogue with Lorenzo and not have to exterminate Killian or Gizmo by simply going to Kane and doing the following: initiate conversation with Kane then choose "I need to talk to Decker." Kane will ask why and the player character must say "That doesn't concern you. Now take me to him." If they fail this check then reinitialize dialogue with Kane and when prompted for a response say, "I'm sorry, I just wanted a job." He will then take the player character to Decker.

After accepting the quest the Vault Dweller can collect their $500 down-payment from Kane. Then they need to go to the southwest exit grid in Downtown of the Hub. This will take them to the Heights. The Hightowers live in the building in the middle of the section. The Vault Dweller should talk to the guard outside the door and mention that they're running late for an appointment to get into the mansion.

Then it is just a matter of walking into the merchant's bedroom and opening fire. Both Daren and his wife need to die. Talking to Mr. Hightower will result in the Vault Dweller being kicked out. In response to the attack, all five of the guards will come running inside. They are moderately well armed: three have 10mm SMGs, one has a Desert Eagle, while Leon has a 14mm pistol. Since Decker demands the elimination of any witnesses, the guards must be killed.

Alternatively, arriving at the mansion at night (after 7 PM) and promising to go away when the guard hassles the Vault Dweller temporarily opens up possible options for avoiding a conflict with the guards altogether. The Vault Dweller can then head right on back to the Maltese Falcon and speak with Kane to get the reward. Hub police officers will not turn hostile.

After getting this quest from Decker, the Vault Dweller can choose not to do it at any time and rat him out to the Hub cops, Sheriff Justin Greene specifically. He'll request the Vault Dweller's help in raiding the Maltese Falcon and stamping out the Underground. One can even do this after completing the quest and receiving its reward, as long as a Charisma/Speech check is completed.

Main article: Steal necklace from the Merchants
Retrieved from "https://fallout.fandom.com/wiki/Dispose_of_merchant?oldid=3291634"
Community content is available under CC-BY-SA unless otherwise noted.