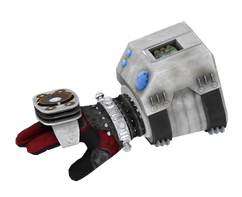 The displacer glove is a weapon in Fallout: New Vegas.

The displacer glove creates a shock wave upon impact, pushing a target back. This electrical glove possibly accomplishes this via a sonic blast, shown by the speaker on the knuckle.

The displacer glove can successfully strike about 495 times from full condition before breaking.