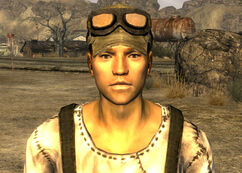 “My message to you has been delivered, and I've got other places to be.”

The disguised frumentarius is a member of Caesar's Legion living in the Mojave Wasteland in 2281.

The disguised frumentarius is a spy and messenger. He will appear if the Courier has a positive Legion reputation, to offer an incentive to remain in Caesar's good graces.

After speaking to the Courier, he will run to Cottonwood Cove and disappear from the map.

The disguised frumentarius appears only in Fallout: New Vegas.

Retrieved from "https://fallout.fandom.com/wiki/Disguised_frumentarius?oldid=3173532"
Community content is available under CC-BY-SA unless otherwise noted.