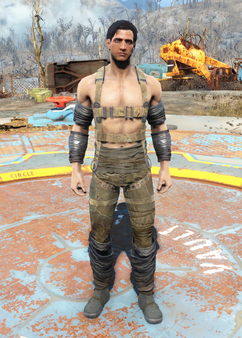 The Disciples wrapped armor is an armor set in the Fallout 4 add-on Nuka-World.

Disciples wrapped armor provides a Damage Resistance of 50 and an Energy Resistance of 102 but only consists of four pieces worn on the extremities. The armor can be changed into an improved version provided that the Sole Survivor has the second rank of the Blacksmith perk in addition to having a full investment in the Armorer perk.

This armor set has no chest piece, which is rare for most armor sets.

Certain pieces of it are sold from Disciple gear vendors at settlements occupied by the Disciples.

All variants of Nuka-World faction armor can be purchased from Gear Vendors built at settlements owned by one of the Nuka-World gangs, which is useful for players who wish to obtain the armor without killing any gang members.