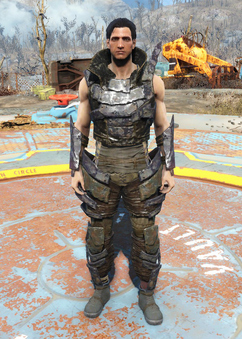 The Disciples metal armor is an armor set in the Fallout 4 add-on Nuka-World.

Disciples metal armor is heavy metal armor consisting of five pieces, worn on the torso and extremities. The armor can be changed into an improved version provided that the Sole Survivor has the second rank of the Blacksmith perk in addition to having a full investment in the Armorer perk. The armor set weighs a decent amount, coming in at 109 pounds before improvement.

Certain pieces of it are sold from Disciple gear vendors at settlements occupied by the Disciples.

Retrieved from "https://fallout.fandom.com/wiki/Disciples_metal_armor?oldid=3502786"
Community content is available under CC-BY-SA unless otherwise noted.