Disarm Traps for the Facility 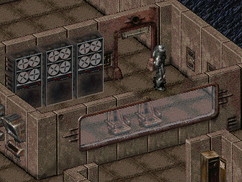 “However, sensors indicate that this facility is no longer operational in its original capacity. Probability favors destruction through nuclear force. Therefore, security concerns are now irrelevant.”— ZAX 1.2

Disarm Traps for the Facility is a half-cut side quest in Fallout.

This quest pops up in the Pip-Boy after getting ZAX to deactivate the robots in the Glow.

The Vault Dweller must proceed to the 5th level of the facility to find a security station. There they must enter a voice code to disarm the various traps. The right code is described by the security tape.

Retrieved from "https://fallout.fandom.com/wiki/Disarm_Traps_for_the_Facility?oldid=2841605"
Community content is available under CC-BY-SA unless otherwise noted.