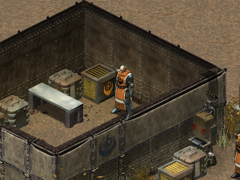 “Stand at attention, warrior. My name is Folleto and I'm the Quartermaster for this bunker. It seems your name appears on my list, so you'll be dealing with me from now on. Let me make one thing clear: Your heroics, your exploits - they mean absolutely nothing if you don't follow proper procedure. You will sign for your equipment. You will make a strong effort to return borrowed equipment in pristine condition. If your equipment is damaged, you fill out the appropriate paperwork. I run a tight shop here. Don't flip my switch, understand?”

Diocletian[1] Folleto is the quartermaster of Bunker Epsilon for the Brotherhood of Steel in 2197.

Diocletian Folleto is a stern, old man in his early sixties. He has a bad temper but follows regulations to the letter. He has a tall, imposing figure which he uses to intimidate the younger members of the Brotherhood. Folleto wears the robes of the scribes, even though he is considered an active paladin.

Folleto could be a reference to Damien "Puuk" Foletto who worked as a quality assurance tester at Interplay Entertainment during the development of Fallout Tactics.

Retrieved from "https://fallout.fandom.com/wiki/Diocletian_Folleto?oldid=3326359"
Community content is available under CC-BY-SA unless otherwise noted.