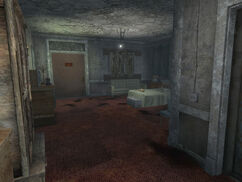 “Your room will be the one upstairs, closest to the lobby side.”— Jeannie May Crawford to the Courier

The motel rooms contain basics such as a bed, sofa, table, chairs, a television set, and assorted containers. In the bathrooms, a first aid box, a toilet, and a sink can be found. The water supply is irradiated, healing HP in exchange for five rads.

The room to the very left on the upper level can be rented from Jeannie May Crawford for 100 caps or obtained for free with a reputation of "Accepted" in Novac.

If Jeannie May Crawford is killed, the room can be acquired from Cliff Briscoe instead. A reputation of "Accepted" in Novac is required for Cliff Briscoe to offer the motel room key. He can be found at the Dino Bite gift shop during the day or in the bungalow nearest to his shop at night.

Sleeping on the bed in this room will heal all damaged or crippled limbs in Hardcore mode. In addition, the bed also provides the Well Rested perk, resulting in +10% XP for a limited time. There are numerous containers in the room, all of which are safe for storage, making this room an excellent place to organize a huge inventory of items.

The vacant room on the first floor is in between Manny Vargas' room and Boone's room. It has a queen-sized bed and a contingent of various hard liquor bottles stored within. All containers are marked as owned, and previewing their contents reveals a footlocker and cabinet containing bottles of whiskey. A large whiskey bottle is found on the floor, and a bottle of vodka is on the couch.

The bed is also marked as owned, with a teddy bear lying next to another bottle of vodka. A typewriter and two pencils rest on a table, and behind the table, a television set has fallen to the floor. A brightly colored lamp casts light on a Giddyup Buttercup poster on the wall. Several pre-War books are found on and around an end table, next to empty drinking glasses. A coffee cup lies in the middle of the room on the floor.

The vacant room that is accessible on the second floor is next to Bruce Isaac's room. It has a twin bed and a variety of chems are scattered around the room. Evidence of violence or serious health complications can be found in the bathroom, where a trail of blood leads to bloody handprints flanking the toilet. A dose of Hydra is in the bathtub, and there is Jet inside the toilet bowl.

In the main room, a table is situated in front of the window, with a dose of Psycho, a reading lamp, and television set. A side table has a carton of cigarettes, a single pack of cigarettes, and an additional Jet inhaler. Surgical tubing can be found next to the reading lamp, in front of a footlocker at the end of the bed, and on the ground next to an oxygen tank. Despite being a vacant room, all the items are marked as owned, and taking them is considered stealing.

There are two empty footlockers under the floor of the player character motel room, one between the bed and the front door, and one next to the bathroom door. They can be seen and used only with the tcl console command.

Overview of rooms in the Dino Dee-lite Motel

View from the front

Overview of the second floor room

Second floor, view from the door

Second floor, view from the bed

Scene of an unknown medical emergency
Add a photo to this gallery
Retrieved from "https://fallout.fandom.com/wiki/Dino_Dee-lite_motel_room?oldid=3408057"
Community content is available under CC-BY-SA unless otherwise noted.