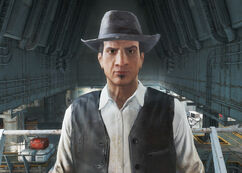 Dino is a member of the Triggermen gang operating in the Commonwealth in 2287.

He is left in charge of monitoring Skinny Malone's prisoner Nick Valentine and appears to be the boss' right hand man judging by his orders. Dino guards the Vault 114 overseer's office, which has been converted by the gang into a prison cell. He stands watch, taunting Valentine.

Dino appears only in Fallout 4.

Retrieved from "https://fallout.fandom.com/wiki/Dino?oldid=3302910"
Community content is available under CC-BY-SA unless otherwise noted.